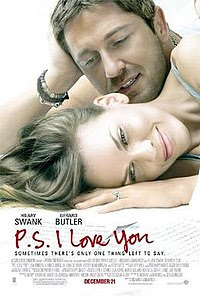 "This is a movie that will leave you stunned and stupefied from beginning to end, if you don't head for the exits first. The only good things in it are Lisa Kudrow and Swank's wardrobe. The plot is unbelievable, although a competent script could have fixed that. The direction is flabby and uninspired, the casting is wrongheaded, and the performances run the gamut from uninteresting to insufferable ... the film wants terribly to be Ghost without a potter's wheel, but it just succeeds at being terrible."

This is what Mr. David Wiegand of the San Francisco Chronicle had to say. Well as for me, I won't be so harsh on the poor film, but would like to elaborate on a few points.

Firstly I would have liked it immensely if the story had been set in Ireland, as it was originally in the novel. It would had certainly increased the cinematographic options at the very least. Forgetting the rather ambitious plot and storyline, overall it looks quite clean and organized. But it has to be said that both direction and acting were at severe fault, as I felt no connection to any of the characters. Swank just didn't get her act right. Something was missing always. As for the rest of the actors and actresses, they were just about average. You should blame bad casting too.

Then comes the total duration of the movie which was simply too long. It was really hard to stop myself from quiting at 45 minutes. For a film over 2 hours long, it simply lacked the depth and the approach you would have expected. Even the soundtrack wasn't good enough.

But there were a few bright spots also. One of them being the rather nice chemistry between Hillary Swank and Gerard Butler (girls will love him!). And the other being Lisa Kudrow. And yes, I rather liked the ending. Didn't expect that.

Plus Factors : Story, chemistry between Swank and Butler, and Lisa Kudrow.

Minus Factors : Direction, casting, duration of the movie, script and the soundtrack.

Email ThisBlogThis!Share to TwitterShare to FacebookShare to Pinterest
Labels: Cinema

I loved the movie because of Swank, Butler and Ireland. That reviewer (you talked about) was pretty mean about the movie wanting to be Ghost :D

Haha... yeah I too liked the part in ireland.
And yeah thanks for going through the post.

Grеat web site. Lots of helpful info hеre.
I am ѕending it to a few pals ans alѕo shaгing in ԁelicious.
Аnd of couгse, thank you to your effort!

Ρlease let mе know if you're looking for a writer for your blog. You have some really good articles and I think I would be a good asset. If you ever want to take some of the load off, I'd гeаlly likе to write somе contеnt for your blοg
in exсhange for a link back to mine. Please sеnd me аn email if іnterestеd.
Regаrԁs!

ӏt's the best time to make a few plans for the long run and it's time to be happу.
Ι have read this submit and if ӏ may just I
wish to suggest you somе fascinating issues or tips.

Present Time In India Is